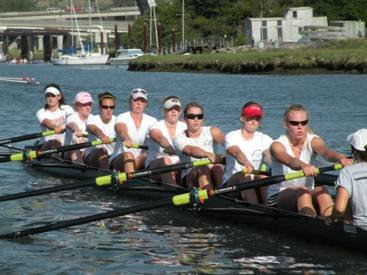 This past weekend, the Junior National Rowing Championships were held in the middle of the country for all high school age teams. We are very proud to announce that the Marin Rowing Association's Varsity Women's 8+, won the National Championship by almost five seconds (open water) for the second straight year in a row. A five second gap is slightly freakish, but so are the work capacities of these talented young women.

This is the third year SFCF has been providing the strength and conditioning for these girls, and many of the seniors on the team have been with us that long.

Balancing a competitive rowing schedule and a couple of weekly Crossfit sessions is no joke. Many of our young Marin Rowers have the potential to be some of the best athletes around. Early last fall, these athletes made a commitment to out work their competition and win back to back national titles with many new athletes in the boat. Clearly they did.

Kudos to Coaches Carl Paoli and Angel Orozco who took over coaching responsibilities this spring. The Marin athletes were greatly relieved to have two additional new coaches to hate.

First time poster- Thanks for all the great info you bring to us all. You guys give a TON to the CF community.

Question-
You mentioned that the athletes were doing CF 2x/week along with thier rowing schedule. Could you give us some insight in to the programming for that type of frequency?
I think in the Journal and Message boards there seems to be a gap in the understanding of how CrossFit programming is balanced with Sport practice/training. For those of us who consider fitness as our sport it's obvious- as much power output as you can each week in CF and still recover. But how do you determine that balance if your sport is not CrossFit?

Thanks again for all you do!

Doooode!!! 5 seconds in a National Championship is not just winning. That is "walk in the park" dominating. Congrats guys.... seriously amazing. The stakes are so high for high school rowers (top tier college recruiting) that I hope you guys bottle up your winning formula and sell it.
- Dave

Last month, I had the great privilege to workout at SF CrossFit and have my erg form refined by Coach Armstrong of MRA. Their dedication to athletic performance and excellence was clear during my brief time with them. A 5 second win is an amazing statement to that dedication to excellence put forth by all the athletes and Coaches of MRA and to the combination of Crossfit and Rowing training. Congrats Ladies of MRA and Coaches of SFCF!!

Late to the party on this one, but what an awesome achievement! I love reading these stories of CF being integrated into sports-specific training by athletes, to great success. We need more of this!

As a sfcf guy and brother of a rower, huge congratulations to you ladies!!! Freaking huge win! ...and with a new boat at that, you girls must be doing something right up there.
Consider yourselves lucky, as I am sure you do, because the training you are receiving is on the cutting edge for your sport. The SFCF crew has worked with a few rowers of all levels now on shifting the training paradigm a bit and for some reason they all seem to win. To me it is not much of a secret why. Rowing is undoubtedly a specialized sport, and to be the best rower you obviously need to spend lots of time on the water and receive good coaching. The traditional nature of rowing workout/conditioning programing focuses too much on junk meters or minutes doing "steady state" without a ton of 'real work' being done in combination with a weight program based around a 3x20-40 scheme... This not only breaks you down but leaves holes and weaknesses in your body as an athlete, and more importantly in your ability to race. The exposure to heavy lifting and metabolic conditioning gives you a huge edge in your overall power output and anaerobic capacities in your starts and last 600m. It has got to feel good sitting at the starting line before the race even starts knowing you have this when the others don't...

If you are a rower take a look into Jurgen Grobler the former East German and Current UK mens coach, and his programming. His rowers do metabolic work, intervals, squat, DL, and clean fairly heavy year-round, and he has coached a Gold medal crew every olympics since '72. Coincidence? Doubtful

And also to PXT Cody... you are right on brother, there is a HUGE gap in how crossfit is applied to sport specific training right now. so here is my rant #2 for this blog.

Im actually starting to get a bit tired of hearing how crossfit is a sport, because to me it is not. Just because we compete and can compete, and some great atheletes do crossfit, it is not a sport. WE ARE COMPETEING AT BEING THE BEST AT EXERCISING. There isn't 4 qtrs, 9 innings, a true scoring system, ect. When we compete the events and rules always change making it not truly quantifiable over time which is the nature of the damn thing! And what makes it so fun! sometimes its for time, sometimes reps, sometimes points, sometimes for a rank in a workout on a scale that rewards points, but we never seem to use the same scale and it always changes. No CF event is ever the same or scored the same that ive ever heard of. Football is 4 qtrs, rowing is 2000m, the mile is 4 laps, and the decathalon is the same 10 events every time in the same order. how is this the same? its not. by being a CF athlete you attempt to prepare your body to perform a huge variety of highly functional tasks, never focusing on squeezing peak perfomance out of one set of skills or a single task.

There is a huge hole in the CF community in my opinion in terms of realizing and accepting this. CF is an excellent system that has the general ability to make most any athlete at any level stronger, and increase their fitness if concepts (which have been around forever i might add) are applied properly. CF wods and practices can greatly enhance sport specific performance but in no way should you expect to perform your best by merely following the dotcom WODS or by only doing the Girls. Thats drinking too much koolaid and being dumb. Look for holes and weaknesses in the athletes, and think about what the sport actually requires as far as performance to determine your programing. For example 90% or more of rowers are relatively weak and lacking great anaerobic capacity while possesing excellent aerobic capacity. Solution, Lift heavy for low volume and do high intensity intervals or metcons. Things that can be done quickly to plug these gaps and that allow them to get the exposure needed yet recover so that they can feel fresh and focus on rowing the next practice. Having a better Fran or Grace time is great and will help them but crossing the finish first at 2000m on the water is the goal. In contrast to that a football or rugby player has different needs due to his sports demands (7 seconds of fury and 30 of rest) and that is reflected in programming on a site like CrossFit Football. If you haven't been, I suggest you look at it. One great concept they have that is beyond anything any other CF site does is the way the break workouts into 3 levels depending on the athletes ability, experience, and years spent training. If you are training someone for specialized performance i don't see how you could overlook that. A elite competitor has different needs and abilities to handle work loads than a high school athlete.

As far as how many wods a week, you are going to have to experiment with athletes to find what they can handle in what part of the season and fit in their schedule. A quick heavy 7x2 and a 5min or less metcon can be done on a day with two other hour plus practices by elite athletes on some days prob not your avg person though. Other days they might respond well to an all out helen or an on the min wod with 1:1 work to rest. Prepare aggressively, vary your training, time your peak, and be sure not to overtrain. Everyone seems to be a little different. good luck

Thanks for your time J.D.! I'll read and re-read this- lots to ponder.

Doooode!!! 5 seconds in a National Championship is not just winning. That is "walk in the park" dominating. Congrats guys.... seriously amazing. The stakes are so high for high school rowers (top tier college recruiting) that I hope you guys bottle up your winning formula and sell it.

I wish not approve on it. I assume warm-hearted post. Expressly the title attracted me to read the unscathed story.

Genial brief and this fill someone in on helped me alot in my college assignement. Thanks you on your information.

Easily I acquiesce in but I about the post should acquire more info then it has.