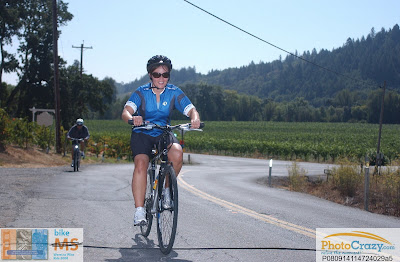 I think y'all know that I signed up to do the “Waves to Wine” bike ride this past weekend to benefit The Multiple Sclerosis Society….you might remember that my best friend in SF, Katie, was diagnosed with MS 2 years ago, at the age of 27.

This was our 2nd year to be involved in the ride… and while I supported Katie and helped to raise a lot of money last year, I did not ride. Why you may ask? Well because I literally have not ridden a bike in about 20 years… I think the last bike I rode was the 10 speed my parents got me for my 10th birthday… so maybe more like 14 years ago. Uugh.

However, this year when Katie mentioned the ride, I decided I needed to step up my game and support her in a new way… so I told her, with conviction, that this year I would ride…which sounded like a good idea at the time.

I didn’t have a lot of opportunity to train for this ride as the roads where I lived in Costa Rica were not conducive to driving, let alone biking… and as you know I spent a considerable amount of time in the last 6 months drinking beer and laying on the beach… and while that is training for something, it certainly isn’t training for 150 mile bike ride.

As it got closer and closer to the date, I began to get nervous and thought about backing out of riding, and just volunteering instead… and then that little reminder light went off in my head and I remembered my Costa Rican commitment to no longer run from things I am afraid of, and to start taking personal risks. So I am proud to say I honored my commitment and did the ride…however, I made the smart decision to volunteer on the first day, and ride on the second day as I decided that was the most sensible thing to do (mostly because in the 2 weeks I have been home I had still not gotten on a bike). Additionally, as we needed people for tent decoration, Katie was thrilled to know I would head up the project (by the way, we won the award for best tent… my new motto for our team “We may not be the fastest, but we are the fanciest”).

There were approximately 12 people on our team (Don’t MS With Us), with varying degrees of bike training/experience. There were a couple guys who ride 100 miles a weekend, some people who ride semi-regularly, some people who just started training a few months ago… and me… the girl who has not sat her ass on a bike in over 20 years. Consequently, while we all started the ride together, we were quickly separated by experience… thus resulting in me spending over 7 hours alone on a bike, riding through the wine country.

While there were sometimes riders around me (and by around, I mean passing by the truckloads), for all intents and purposes, I was alone…. with no music… and a sore ass…riding past vineyards where I would rather be drinking the wine than pedaling a bike. After all, that is what I “trained” for in Costa Rica .

I am not going to lie to you, it was tough, maybe physically the hardest thing I have ever done… and I had a few really difficult moments where I thought about quitting…but I didn’t. I crossed that finish line and felt one of the greatest senses of accomplishment in my whole life.

You may wonder why I am telling you this… well, unlike some of my other ramblings, this one has a point.

I was inspired to ride because I wanted to do this for Katie, while I am always great at raising money, I wanted to show Katie that this was important enough for me to get on a bike and pledge my full support. However, while Katie was my motivation throughout the race, as she was not anywhere around me, I had to constantly tell myself that I was doing this for her. In theory, you’d think that would be enough… but even knowing that I wasn’t going to allow myself to quit and that I was going to finish this for Katie… there were moments where I thought I might not be able to ride one more moment, or make it up that next hill.

A funny thing happened every time I was in one of those moments… someone would encourage me. Sometimes it was a rider passing me with a kind word, or a volunteer at a rest stop, or some person staked out along the side of the road cheering with cow bells … I realized it didn’t really matter who it was, what mattered is that there was someone there telling me to keep going, to keep pushing, and though they didn’t use the words, to believe in myself.

One of those times, the necessary encouragement came from one of my fellow Crossfitters, Josh Cunningham, who sent me a text message that said, in part, “When it gets tough, just know someone else around you is suffering much more and hasn’t stopped.” While Josh knew I was doing the ride, he didn’t know at that moment I would need that exact encouragement.

Except that he did… because he is a member of San Francisco Crossfit…and that’s who we are, and that’s what we do, we encourage each other… we’re there for each other, we cheer for each other, even when we are 3000 miles away. It is one of the reasons I love SFCF so much.

Every time any of us gets to that “ugly place” where we feel we can’t go on, someone, through their labored breathing, who sees us struggling, takes the time, the breath and the energy to offer a word of encouragement… or do that one extra pull up on our behalf… and that makes all the difference in the world.

I realized this weekend that I take encouragement for granted a lot at Crossfit, because it just always happens… but when you are riding alone, up hill, with 45 miles to go, legs that are throbbing and an ass that you think might never be the same again, and someone rattles a cowbell or sends you a text message, you realize just how impactful that is. And more importantly just how lucky you are to be a member of SFCF where that is an every day occurrence.

beccarussell said...
This comment has been removed by the author.
12:02 AM

I wrote this as an email to Kstar, Adrian, Juliet and a few of my training peeps after I completed the MS Ride. Clearly I was feeling inspired and thankful.

K and J then asked my permission to post it on the blog...

Everything I said in this posting is true and I really am lucky to know and work out with all of you, and am thankful for all that you give me.

Equally, I am sorry for the grammatical errors in my email (which I only now noticed as I read this posting)… as well as the age contradictions (typos.. and by typos I mean denial)…it really has been between 20-24 years since I have ridden a bike…. Sadly it is true, I am that old.. as demonstrated by the "uugh…"

But that doesn’t take away from the facts… the facts are simply that the people who work out at SFCF are some of the finest, most inspirational people I have ever met in my life… and I am better for knowing all of you.

On a side note, I am considering bringing cowbells to SFCF, not only are they lighter than kettle bells, they are far more inspirational, and I am not just saying that bc I am from Texas.

Becca, you rock! My mom has MS. Fuck MS. I will try to do this w/ you next year.

I couldn't have said it better myself. Fuck MS!

We would love to have you ride. Team Don't MS With Us would welcome anyone who wants to join our team... but be prepared for fanciness in the tent...we plan to repeat our "best tent" win next year.

Speaking of getting your ass kicked for a good cause- only 2 more days to sign up for FGB on Sat. 27th.

Get on it people!

For those participating in FGB, here is a chart that you can use to calculate your score.