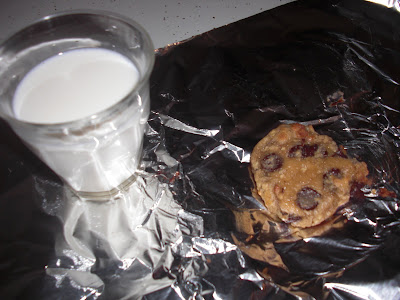 We are pretty Paleosexual around our house these days. What? You don't know what Paleosexual means? Well, roughly defined it's adhering to a lifestyle based around Gluten-Free Paleo/Zone eating and short, intense Crossfit style exercise. (It's also pretty much the inverse of eating low-fat and training to be a triathlete.) Even my three year old daughter asks for her daily fish oil dose at breakfast.

But alas, once in a while we do want ourselves a bit of the WHITE DEATH. And once we've had even a little taste, we are like a den of those creepy zombies in "I Am Legend."

What are we to do?

My wife Juliet hatched the idea of going absolutely sugar free (no sweet, cake, cookie, ice cream, etc) till the end of April (her birthday).
She has even started a Facebook group called "Jesus Hates Sugar". (He would you know.)

The out? You can PRE-pay for one sweet item on the same day you plan to indulge by performing 100 consecutive burpees (with a jump and clap over-head at full extension).
The Pre-Payment shame has to be done on the day of, and cannot be credited to a day in the future. The burpees expire at midnight.
You also can't spread the burpees out over the course of the day in an attempt to ameliorate their heinousness. Burpees done at a Crossfit workout also don't count.

I tested the burpees for cookies system yesterday and have to tell you that in order not to become fiercely sweaty, you should plan on at least 15-20 minutes to complete the task.

Was it worth it? Let us know. It's about an even trade. Two cookies by the way? That would be 200 burpees.

Are you in? If you are, skin that pony and post to comments.

So only rule is..eat something with sugar, do 100 burpees/item, correct?

20 minutes of hell for 20 seconds of bliss? I'm gonna have to pass. Burpees suck. No cookie for me :(

P.S. Paleosexual, love it! But not sure I'm gonna tell my co-workers that's what I am- they'll think I'm even weirder than they already do with my huge bag of meat and veg that I bring to work everyday ;)

I tried the no sugar thing for a few weeks, fantastic feeling of success! I'm down!

Due to my inability to maintain weight and even gain any, I will have to take back my RSVP.

Very tough to maintain 25 blocks without my dairy. Unless anyone else has a suggestion.

Roop, your inability to gain or maintain weight is 100% due to not eating enough. It is very hard to put on weight following a strict Zone diet. You need more calories. Way more. Milk is the way. Don't give it up. Instead, drink a gallon of whole milk a day on top of what you are eating. Supplement your gluttony with a proper Starting Strength style training regimen and then tell me that you can't put on weight. I'm 30 lbs heavier than I was 8 months ago and I've got another 20 to go. Be aware that your Fran time might suffer a bit during this process.

My gym (CFO) is doing a similar "challenge" with regard to sugar. The CFO version is even a bit more extreme in that people are trying to avoid any foods that have any added sugar or artificial sweeteners. Does your restaurant's salad dressing have sugar in it? Better not eat it then... Good times.

I think such challenges are a bad idea. I don't really eat desserts as it is, so going cookie (or cake or ice cream) free is pretty easy for me. I can't tell you the last time I had a cookie. It may have been as long as 6 months ago. Despite that, I think that if you don't eat many sweets now, you will be unlikely to see any performance gains as a result of forgoing your once-a-week bowl of ice cream. You may, however, make yourself unhappy and spend even more time obsessing about food. Eat, drink, lift and be merry.

Ok so crossfit always likes equations like F=M*A
Well I did some mathmagic and.

???
how is that for a mind fuck.
I will never enjoy cookies if I associate them with burpees.

TomC - food obsession is bad for sure, but having a little fun fucking with yourself can be a good thing too. It's all in the approach. ;)

I'm in remotely if you'll let me (I'm a distant SFCF fan from Melbourne, Australia).

I think its a great idea... and I requested to join the Facebook Group...

Where does beer fall in on this deal?

Andrew Philips said...
This comment has been removed by the author.
11:44 AM

I think your math was slightly off:

So, 1 cookie (with all its pleasure) is the opposite (negative) of all that pain and nausea (100 burpees/20min).

PS: This also has the weird result that -1minute = 5cookie*burpees. I don't know what a cookie*burpee is, but apparently, if you can put 5 of them together, you go back in time one minute! Does this mean cookies and burpees are some backdoor to the fountain of youth? Ahh, only if it were so.

Hello !.
might , probably very interested to know how one can make real money .
There is no need to invest much at first. You may commense to get income with as small sum of money as 20-100 dollars.

AimTrust is what you need
AimTrust represents an offshore structure with advanced asset management technologies in production and delivery of pipes for oil and gas.

Its head office is in Panama with affiliates around the world.
Do you want to become a happy investor?
That`s your chance That`s what you desire!

I`m happy and lucky, I began to take up income with the help of this company,
and I invite you to do the same. If it gets down to select a proper companion who uses your money in a right way - that`s AimTrust!.
I make 2G daily, and my first deposit was 1 grand only!
It`s easy to join , just click this link http://izycevog.bigheadhosting.net/yjorap.html
and lucky you`re! Let`s take this option together to become rich

Hi there!
I would like to burn a theme at here. There is such a nicey, called HYIP, or High Yield Investment Program. It reminds of financial piramyde, but in rare cases one may happen to meet a company that really pays up to 2% daily not on invested money, but from real profits.

For several years , I earn money with the help of these programs.
I'm with no money problems now, but there are heights that must be conquered . I get now up to 2G a day , and my first investment was 500 dollars only.
Right now, I'm very close at catching at last a guaranteed variant to make a sharp rise . Turn to my web site to get additional info.