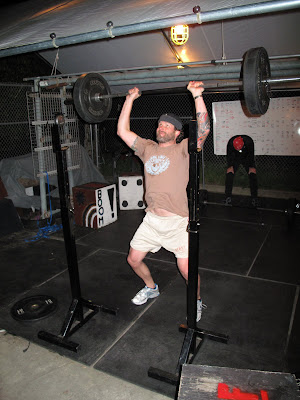 Orientation is important. Understand we are not talking about the type of orientation that requires a fire-side chat with mom and dad, but rather the simple relationship between you and whatever heavy thing you would like to lift. You need to be clear in this relationship: The basics of What do I want to happen? How can I make this happen? and What Happens to make this happen? should be given a moment every once in a while (but not in the moment, as that will almost assuredly mean that the moment has passed).

Don't get lost in this process and think in terms of concepts, not details. Let's take a look at young Jo in the picture above. What movement is Jo performing? What is he hoping to accomplish with this lift? What direction is his body travelling during this phase of the lift? The bar? Having a clear road map is one strategy to make the path travelled less bumpy. Now remove this idea from your thoughts and lift.

Notorious P below has the right idea: Think, then enjoy. Or don't think, but react. Remember, lifting, training, huffing and puffing are all means to an end, not the end itself. 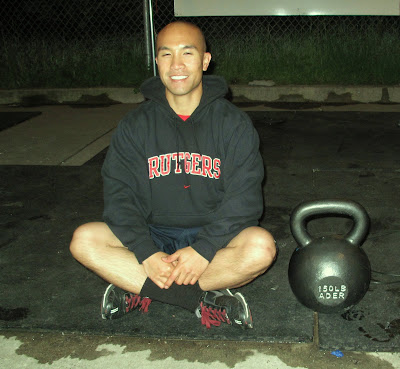 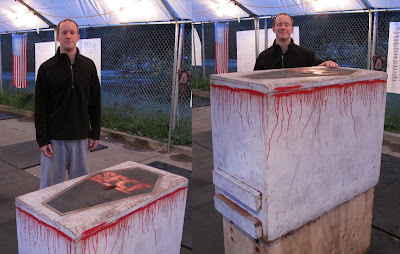 Ok, so the time has come. The gauntlet is officially being thrown:

Make it to the top rung of the Coffin and you get a free T-shirt. You also get to immortalize yourself in SFCF lore by signing your name on Larry's creation. 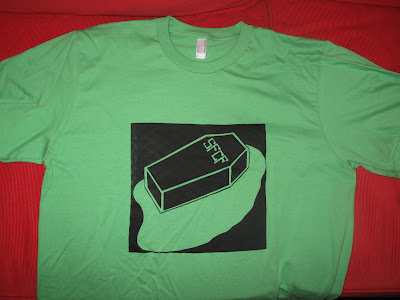 You can take a running start, but you have to land with both feet and stand up (stick it!). Successful attempts have to be witnessed by a coach. So far we have two athletes that have been successful...

The NorCal Regional Qualifiers for the CrossFit Games are just around the corner (May 2nd and 3rd). Being lucky enough to help out with the planning meant a dry-run of the proposed event over the weekend (Mega-Fun!). While I can't shed any light on the event itself, maybe the following pictures can give you a hint or two: 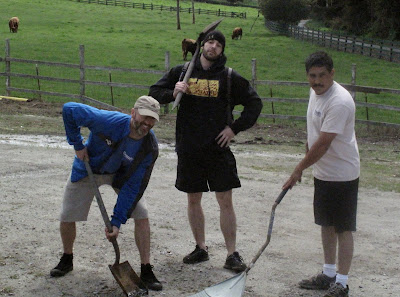 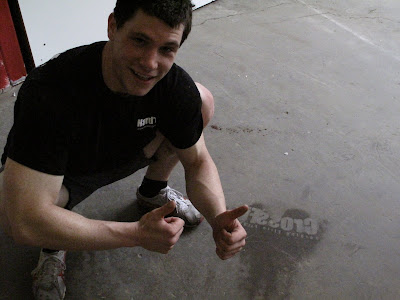 The event will be tough, but will definitely select some fit individuals to represent our area in the CrossFit Games this summer. That being said, the qualifier is open to all levels and I would highly recommend everyone who is even slightly interested to sign up and compete. It should be a good time and a great experience if competition is your thing.

If competition isn't your thing, volunteers are still needed to help out with the logistics of the event as well as judging. If that is something you are interested in, please contact Austin (the dude in the middle with the shovel): austin @ crossfitunlimited.com. 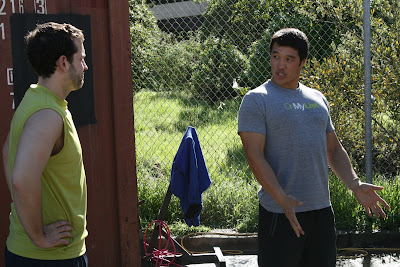 We think it is our Coaching staff that makes us different.
And we are clear about using the word "Coach" instead of "Trainer".
Is there a difference?
We think there is.

Often, coming to SFCF is the first time an athlete has any experience with coaching. And, many of our athletes come from extensively coached backgrounds and find a coached experience with us that they recognize and one in which they can excel. Coaching is always the difference.

Do they get coaching? You bet, check out the furious five getting better. 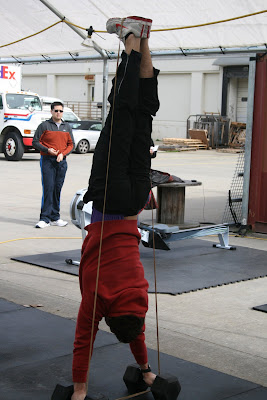 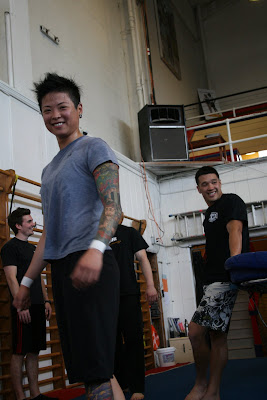 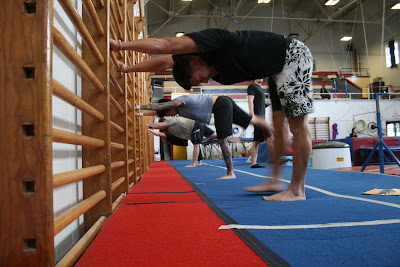 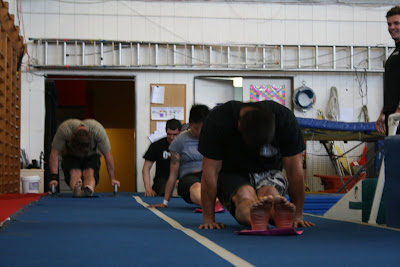 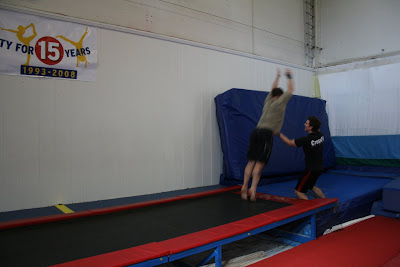 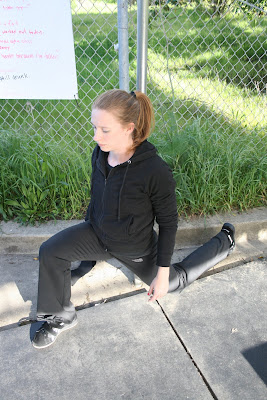 The psoas (soh-as, like the P in pneumonia) is a nasty little critter of a muscle. And as an aside, it is the fillet Mignon of the human body (helpful if you should crash your plane with your Crossfit team in the Andes.) The superior attachments of this thick bastard are along either side of your lumbar spine (with fibers potentially going even higher.) Then, the psoas crosses over the pelvic bowl and inserts on the inside of your femur. You could say the psoas is a two joint muscle but it ends up crossing upwards of at least eight functional anatomical segments. We tend to think of it as the powerful hip flexor it is, but this is a little simplistic. The psoas also acts to flex the trunk at the hips if the legs are planted as in a glute ham sit up. The psoas also acts to position the head of the femur in the acetabulum. All this AND this hard working "hip-flexor" stabilizes the spine (poorly) and helps keep us in a solid extended position (this last piece is a problem sometimes when we deadlift--over extension.).

So, you can imagine that a tight psoas can potentially cause quite a few problems. Imagine the crazy lumbar extension load that goes on in sprinting when a tight psoas gets super stretched when the hip is at full extension behind the athlete (stronger abs anyone?)

We hear about hard working athletes that get an achy low back after sleeping on their backs all night. Psoas anyone?

Needless to say, psoas warming up/stretching has been addressed by a million different people in a million different ways. When you perform the Sampson stretch as advocated by the "better Crossfit warmup" you are hitting the front or anterior hip capsule/structures and a bit of the psoas.

But, we want to advocate for a little bit more psoas focused/biased stretching
movement.

The set up will look the same for any kneeling hip opener, but the difference is the blocking of the upper back by a pole or door way.

So, take an extreme kneeling position in front of a pole or door way while thinking about maximally opening the hip of the trailing leg (that would be going through the doorway behind you.) 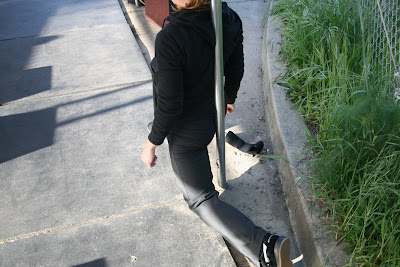 Normally we would tell our athletes to imagine tucking their pelvis under to facilitate the hip/psoas stretch. 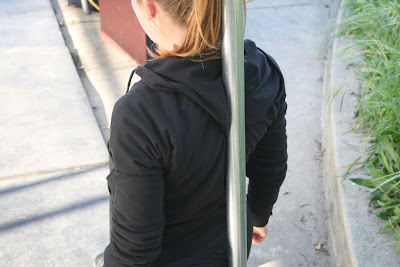 Instead, think about pushing your upper back into the pole or door-jam as above. This will act to fulcrum your pelvis forward and simultaneously keep your back upright.

Practice your contract relax by imagining that you are driving your back knee forward.
Five seconds peak contraction, ten seconds of moving further into your new range.
Shoot for a long 90 second exposure.

Oh, and that horrible ripping sensation going on in your pelvis?
That's just you becoming better at everything. 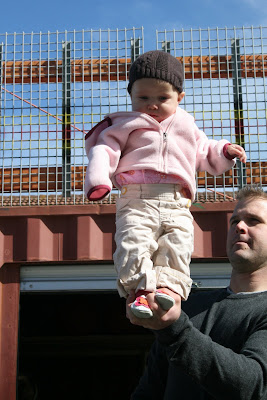 SFCF is for EVERYONE!!

- Who: Friends & Family of current SFCF. Know someone who feels too out of shape, shies away from our normal class environment, doesn't feel like working out can be fun, doesn't think kids can be properly be trained and have fun, or feels like they are too old? Well than this is the first step in helping improve that.

The event will be FREE! We are highly encouraging members to bring their kids and seniors.

- Why: Kids - Showing kids different ways of being active (there will definitely be games involved), while introducing them to some basic CrossFit movements. Making sure kids have a fun experience and that parents understand their kids can benefit from some fundamental movement education.

Parents/Grandparents - Trying to reach out to a community that feels they have lost some independence. Showing people that they should never feel they can't do anything, but showing them the proper way to move and continue enjoying life.

- The Goal: Expand the SFCF community and show people you can never be too young or too old to have fun and stay fit!!

Please RSVP at SFCF, there will be a sign in sheet posted. If for some reason you cannot get to the sign in sheet, let Angel or Roop know you will be attending and who you will be bringing. We will definitely be ready with a workout and games for all ages!!

We contend that the more ways we can train hip function in our athletes, the better they perform. We do not respect one hip-trick ponies. We want hip function fluency (HFF). 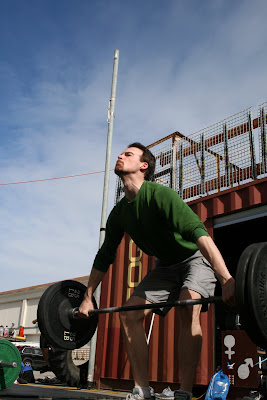 It really is rather simple. Training athletes to violently extend their hips through "easy" movements like the Snatch, builds real athletic capacity. If an athlete can complete a powerful hip extension movement while orienting their spine in the direction desired, then serious legit-ness has been facilitated. 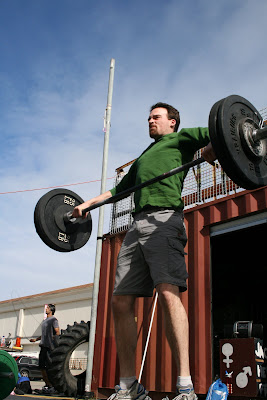 Olympic lifting teaches athletes to fully open the loaded hip while transitioning the torso and spine into optimally upright position. Simple and effective. 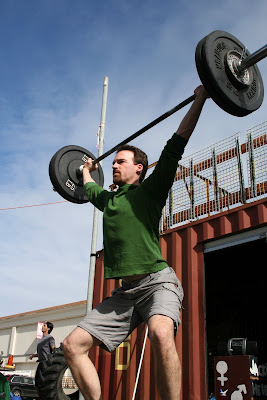 James Mills (above) is a local professional Ballet dancer here in SF. He has spent the better part of his life learning to extend. It's not an accident that although he has been training with us for less than a year, he appears to have pretty solid HFF. Olympic lifting is just his latest. As he can attest, the better he gets at the snatch, the better he get's in everything else.

Now take a look at the Boz messing around below. How, you might say, is he so damn capable at not risking Diane's life. Simple, he's fluent. 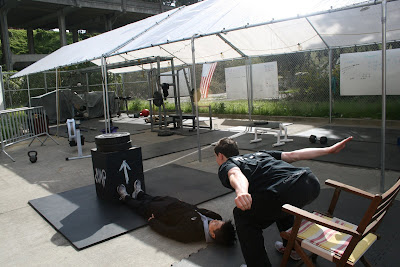 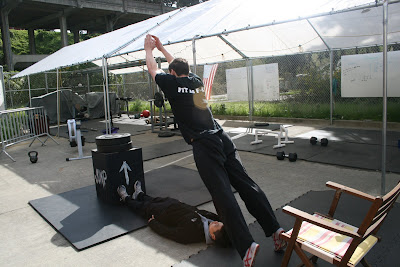 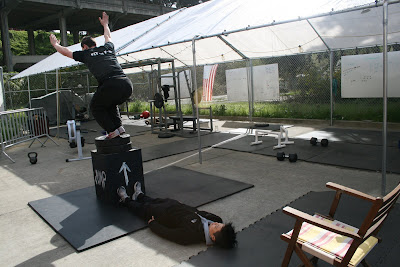 Note the full hip and arm extension prior to lift off, with a spine pointing in the direction of travel. These traits are trained and learned. By the way, Boz is a pretty good Oly-lifter too. 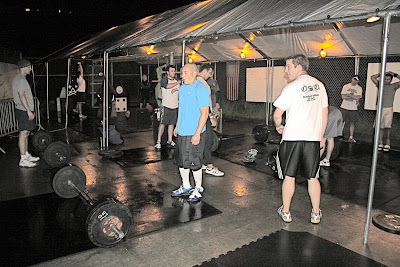 The world can be divided into two groups. Which are you? Bill Murray in Stripes, or Bill Murray in Meatballs? It's really rather simple. I am a Redvines guy, so is my wife. Everyone else can sod off. But you get the point. How you answer one simple question really ends up putting you into one camp or another. 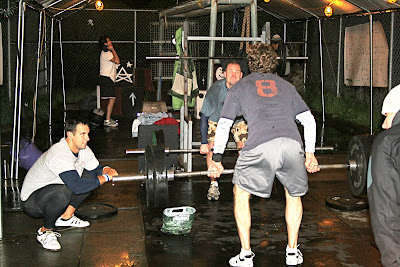 On to the point.
We are asked on a consistent basis, "What do you do when it rains?"
People are shocked to discover that we still train, outdoors (we do have 1200 square feet of canopy for crying out loud), in the rain, in the wind. Nothing changes, except that sometimes we do fewer burpbees (sometimes). 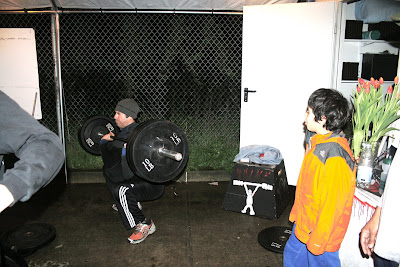 And, at the instant that we respond, "We Frakking do high-rep Olympic lifting, what do you do?" That person drops into one camp or another. They either totally get it and see the advantages of always being outside under the beautiful bridge while performing training that actually reflects real world conditions. Or, they don't get it. At all.
They look at us like we've got a third eye (which we do, we ARE good coaches).
And at that moment we know pretty know all we need to ever know about that person.
SFCF isn't right for everyone. It's just right for us. 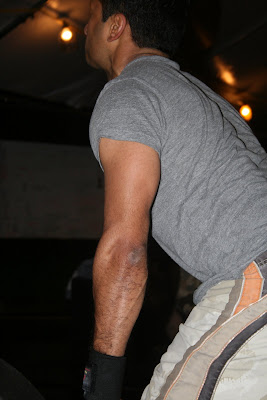 Well, which are you, Stripes or Meatballs?
Post answer to comments.