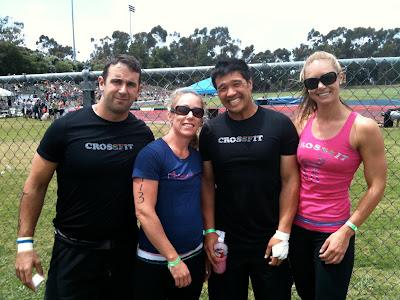 This weekend past, SFCF sent a team to compete in the Crossfit Southwest Region Qualifier. There are several qualifiers going on like this on across the country in the lead up to the 2010 Crossfit Games, but none will be as large or have as fierce competition.
There is something special about competing against California. Maybe it's because Crossfit was born in this state that there are so many excellent gyms, coaches, and athletes around. Either way, the Southwest Regional was larger than the entire Crossfit Games last year. And, everyone was better prepared.

Including us.
As you may already know, Team SFCF was able to pull out an incredible win over some really excellent teams.
In fact, no other team was able to be as consistent across as many varied workouts as SFCF. In a scoring system where lowest points wins, SF had half as many points as second place, and a full quarter of the points for third.

There ended up being 76 teams competing for one of eight births to the games. The quick math yields 456 athletes competing for the bragging rights of being the best affiliate team in the region.

Driving home with the "Trophy" on our dash (see below), I started to think about what it really took to have six amazing athletes out-exercise everyone in the region. 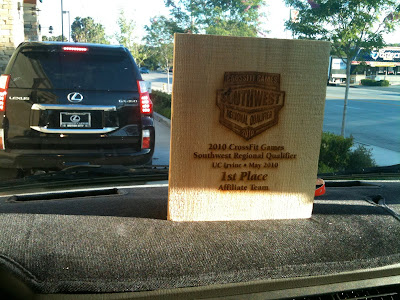 To be frank, it takes a fair bit of luck. No not because the workouts favored us (there were no barbells to be seen) but we were certainly lucky that we were good at the ones that came up (as anything could come up). And it wasn't the other 76 teams there weren't on their A-game, because they decidedly were.

No, I think it takes luck to "happen" to get six terrific athletes together at a parking lot canopy gym.
It takes even more luck to have an incredible coaching staff that is obsessed.
Finally, it takes freakish good fortune to have a community of training partners that show up day in and day out literally for years.

In fact, it's impossible to create. It just happens. That's what makes it so special.


Coach K-the-bob-roll-of-fitness-color-commentary-star
at 6:33 AM 11 comments: