Sometimes, You Just Gotta Do It 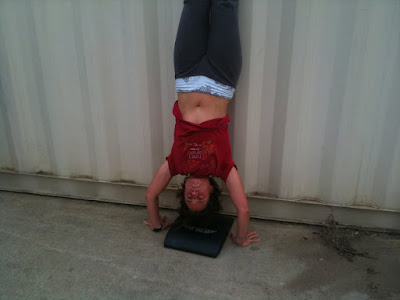 Recently at SFCF, we performed some rough calculations and estimated that we have administered over forty thousand workouts. It’s true and a little staggering. And, buried within this considerable volume of athletic coaching, are certain patterns and predispositions of our athletes. For example, we rarely have to tell women that the weight they are using to back squat is too heavy, and that is why they aren’t breaking parallel (the opposite is quite true of men). Another one, and the topic of this post, is that we rarely see our athletes choose to slow way down (finish last-ish) and commit to actually finishing a skill or movement when they can keep their speed up by substituting or scaling. For example, we will often have clients that can perform all the pull ups in a workout like Fran, as singles, but will move to some variation of jumping or band assisted pull ups if given the chance. Yeah, yeah, I know, you’ve got to “ scale too” to increase work capacity, etc, etc… And it’s true, it is completely appropriate to work at relatively scaled loads to manage overall higher average work outputs over time. But it is also true that sometimes you’ve got to go full dose, and as slow as it takes to get the job done. I mean, forty-five deadlift singles at 225 is a daunting task for a beginner and made worse by the psychology of going SLOW. This however is where real capacity is gained. 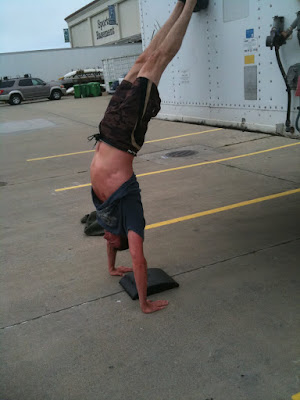 As an experiment, take a look on the main crossfit site at the next time a workout like Isabelle turns up (Powersnatch 135 x 30). You will literally see people posting sub 4 minute times with a piece of PVC or the bar. Dewd. Seriously. There is no linear progression for scaling workout that don’t come around very often. And this is not an insignificant point. There are so many things to work on in Crossfit (like several Olympic sports for example) that it is hard to go light and fast one time, planning to go slow and prescribed next time, IF the next time you see that given exposure is several months later. What actually happens is that people NEVER opt for heavy and slow. When we “score” workouts at SFCF for example, we count unmodified and slow, higher than light and very fast. And so should you.
You are never going to go fast at a workout that involves forty-five handstand pushups unless you can actually PERFORM forty-five hand-stand pushups.
Remember, you can always manipulate rep-schemes to fit your fitness/capacity levels and still perform all the work of a given wod. Instead of 21-15-9 for example, how about nine sets of five? Or, god forbid, fifteen sets of three! Clearly it’s tough to do this with deadlifts if you can’t actually pick up the weight, or cleans etc, but there are movements that you can do like the negative portion of the handstand pushup.

At some point, you’ve got to bear down and actually attempt to complete the work.
It’s ok if you have to go slow. Your ego will survive the experience. 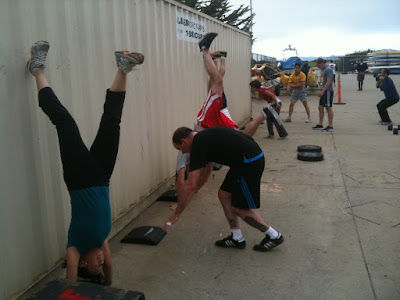 Thanks for this, Kelly! From my own experience, I have to say that most of my major gains came when I got comfortable with picking the heavier weight or the harder movement, even if it meant finishing DFL. And I think the biggest plus comes in the mental department; it's humbling, motivating and satisfying to try something truly difficult, struggle through it and make it to the other side, however long it might take. This especially true with the community we have: I can't tell you how many times I've been pushed further than I thought possible by the cheers of those who finished before me. The mental toughness you gain from this will serve you far better than the extra seconds you shave off the clock by scaling.

Thanks Kelly! I have been struggling with this topic recently since I started consistently doing CrossFit Football. Some of the weights are far heavier than I have ever done in a workout before (i.e. 7 rounds of 3 power cleans 225 and 40 yd sprint). So far I have done every workout rx'd but was worried that I was doing myself a disservice by decreasing intensity. So far I have found quite the opposite is true, the heavier weights are getting easier (duh) and when WODS with a pure metcon component come up, i feel like I haven't lost much if anything in the form of intensity. This post is a great reassurance that to get better, you have to push yourself beyond what is comfortable. Thanks

...and sometimes you just gotta say "thank you." Great post...

+1, Kelly. I've been struggling with real pushups for a while. Last time Cindy came around, I told myself to suck it up, take the score hit and get off my damn knees. My total rounds went from 19 with banded pullups and knee pushups, to 5 rounds with real ones. Huge hit, but I'm stronger for it!

Sometimes you just gotta grind through it!

Here's a quick video of the Fran Off Tournament from last weekend. Angel and Manwell have a pretty sick bar transition.

I CF'd virtually on my own for the first 9 months I did it and I did everything rx'd (even when I should have scaled) but it built both character and capacity in a way that choosing an "easier" way out never would have. I remember doing Angie (in week two of CFing) and I had to do 80 out of the 100 pullups as dead hang singles. The only benefit I could think of not in working out by myself then was not knowing that I should have been both embarrassed and proud.

For some reason I thought of this post today, Its gonna take me an hour but I'm gonna crank it out!

i am distraught i didnt get to meet you in boston. i hopefully will get your next east coast mobility seminar. regardless, i LOVE THIS POST! always pushing for clients to go this route.

Thank you, I learned something from that

When ever I surf on web I come to this website[url=http://www.weightrapidloss.com/lose-10-pounds-in-2-weeks-quick-weight-loss-tips].[/url]Lots of good information here sanfranciscocrossfit.blogspot.com. Let me tell you one thing guys, some time we really forget to pay attention towards our health. Let me show you one truth. Research shows that closely 80% of all USA grownups are either fat or overweight[url=http://www.weightrapidloss.com/lose-10-pounds-in-2-weeks-quick-weight-loss-tips].[/url] Therefore if you're one of these individuals, you're not alone. In fact, most of us need to lose a few pounds once in a while to get sexy and perfect six pack abs. Now next question is how you can achive quick weight loss? [url=http://www.weightrapidloss.com/lose-10-pounds-in-2-weeks-quick-weight-loss-tips]Quick weight loss[/url] is really not as tough as you think. You need to improve some of you daily habbits to achive weight loss in short span of time.