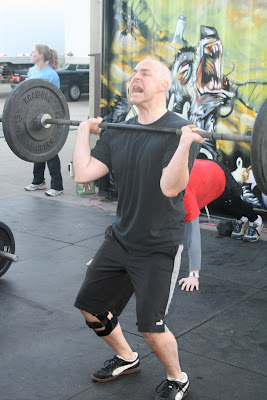 As promised here is the second installment. You may need to review part I.

As we begin to view our athletic movements and bio-mechanics through the filter of soft-tissue load-ordering, common athletic injuries and sports-related body problems become much easier to understand. Let's use the classic sport's medicine diagnosis "jumper's knee," as an example.

Jumper's knee is generic term for some kind of tendon problem (tendonopathy-itis/osis) of the patellar tendon below the knee cap (which is technically a ligament I know.) This kind of problem most often expresses itself as a painful knee cap in jumping related movements like the push-press in the image above.

Let's take a closer look at what's going on at the knee. It order for Bernard to keep his torso upright and his "jump" moving straight up and down, he clearly has to bend more at the knee and not the hip (hip flexion will tilt his torso forward and he'll end up jumping off axis and out of plane, or squatting). But because the knee and quadriceps are loaded first (they typically move first), subsequent loading of the hips and posterior chain will only increase the load forces at the knee cap. Now imagine a high level athlete with tight quads and tight anterior hips (gasp, impossible) and you've got additional freakish system tensioners on an already pre-loaded/pre-biased tendon system. You do have to keep the torso upright after all (so hey, burn those patellas). Compounding the forces at the knee is the anterior translation (forward movement) of the knee out over the foot as the athlete dips lower and nears peak compression. This translational tendon loading can exponentially increase the forces at the knee cap.
No wonder your knees are sometimes sore after a crap-ton of push-presses!

Clearly, cueing athletes to turn our their feet a little, stretch their quads, get adequate warm up, and compress to their heels, will significantly attenuate the forces on the tendon at the distal knee cap. You need to get as much hip loaded as is possible without inclinating at the torso. But now, you understand how and why these tendon puppies get hot.

So don't jump the barbell up from some knee forward, dog-poo, weak-ass(literally), muted-hip (CF talk for weak), position and wonder why your knees are all uppity.
You loaded 'em first, then jumped. And where's the butt in that?

Given the first two installments, is it correct to say that the proper cues for thrusters would be to move the hips back first, trying to load the hammies, and get all the way down in a full squat position, then begin the upward bar movement, focusing on the posterior chain moving the weight? or am I off base? Thank you.

great post-I've been suffering from this-many thanks

I have suffered from knee pain for most of 2009. About 3 months ago I started to read Coach KStar's blog and took his advice and I am happy to report that this week, for the first time in a long time, I was able to do box jumps pain free.

The pain is gone and I couldn't be more greatful. I will continue to take his advice to stay injury free.

Thanks Coach!! you rock!!

um. no one commented on the incredible juxtaposition of bernard's expression and the scary wolf behind him?

John, I would assume so. There was an interesting CrossFit journal video where Dave Tate analyses Greg Amundson's Fran. Dave Tate was saying exactly the same thing, stating that moving to a more posteriour dominant movement pattern would make the thruster more efficient. The journal post's title was Dave Tate Critiques Greg Amundson's Fran - you might want to check it out.

great article. I would love to follow you on twitter. By the way, did any one learn that some chinese hacker had busted twitter yesterday again.

quite interesting read. I would love to follow you on twitter. By the way, did you learn that some chinese hacker had busted twitter yesterday again.

Genial post and this enter helped me alot in my college assignement. Gratefulness you on your information.

hi ppl. I'm honestly into shoes and I have been looking as far as something that meticulous make. The prices due to the fact that the velcros were approximately 220 bucks everwhere. But for all I base this locate selling them for the benefit of half price. I exceptionally like those [url=http://www.shoesempire.com]prada sneakers[/url]. I will definetly buy those. what do you think?

Hi readers
Do not miss your chance to get a free iPhone 4G. Visit http://bit.ly/d9QOON

Wow Kelly, what a day to stumble upon your blog. I've had jumpers knee (a.k.a osgood-schlaters (sp?) for over 10 years (I'm 23 now) and the only advice I ever got from sports medicine doctors was to, "stop doing sports." Thanks, real helpful guys. I've recently been doing a lot more olympic lifting and I've noticed the pain coming back more acutely. I'll definitely be keeping this tip in mind the next time I'm on the platform. Thanks for all the info you provide on the CF journal. I'll be following your site now going forward....Jon

hi bros. I'm honestly into shoes and I have been digging as far as something that singular model. The prices for the boots were approximately 210 pounds on every page. But finally I set this location selling them for the benefit of half price. I in reality like those [url=http://www.shoesempire.com]gucci sneakers[/url]. I will probably purchase those. what is your opinion?

good morning people. I'm honestly into shoes and I had been searching allowing for regarding that meticulous make. The prices seeking the boots were all over 230 pounds on every page. But finally I set this location selling them as a remedy for half price. I in reality love these [url=http://www.shoesempire.com]gucci sneakers[/url]. I will definetly buy those. what is your opinion?

hi people. I'm actually into shoes and I had been looking allowing for regarding that exact brand. The prices due to the fact that the shoes are all over 330 bucks on every page. But completely I base this location selling them for half price. I exceptionally love those [url=http://www.shoesempire.com]gucci sneakers[/url]. I will definetly buy those. what is your opinion?

Thanks very much!
-Jared

What you are not posting anymore?
Get slapping that keyboard Kelly!
Your friend from Napa.

Love the spambots. "I'm honestly into shoes" and "I in reality love these." Aw, c'mon, honestly? Even in reality?