The Difference Will Be 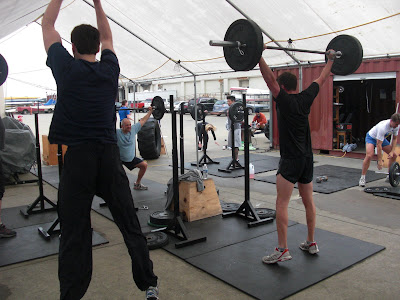 The great Crossfit Experiment Secret is out of the bag. There are literally hundreds of thousands of people that train for work capacity. And, many of these people are really good athletes. We are witnessing real competence in our foundational movements and elementary programming.

What do we mean? Well, just about anyone that shows up at SFCF and has been crossfitting for a while has a pretty decent Cindy score for example. In fact, we are beginning to see that little disparity exists at the upper output ends of simple gymnastic/bodyweight control based workouts. Sure, there are some freaky scores out there, but literally we are starting to see a lot of people working at near time capacity. The outcome is that our best athletes are only marginally better at foundational type workouts like Helen, Cindy or any body weight/simple output workout.

However, the second some of our most practiced workouts become a little heavier, we have observed significant decreases in outputs between athletes. Changing an overhead squat load within a workout from 95 to 135 pounds literally separates athletes like chafe. And therein lies the difference of good to great. It's not an accident that all of the top athletes at last years CF Games are literally some of the strongest athletes around. And don't be fooled for a moment. Even though there was some increased loading at the games, the events themselves were not heavy. The loading was just heavy enough to illustrate the significant differences in real, non body-weight based movement work outputs.

We have witnessed this loading phenomenon amongst crossfit coaches as well. Make a really good athlete clean 185 or 225 pounds for reps, you start to see people crack and real differences in work output potential emerge.

So instead of chasing a improvement in your Angie time of 4 seconds, try performing a workout you know and rock--at a load where your time begins to significantly drop off.
Can you perform 30 clean and jerks with 135 lbs in under three minutes? Shame on you.
That load should be 155 or 185 pounds. Go out and start failing all over again. And this time make it heavy, because everyone is getting good at runnin' and chinnin'. 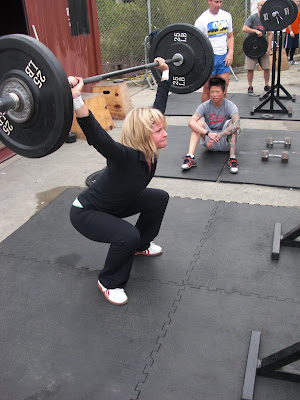 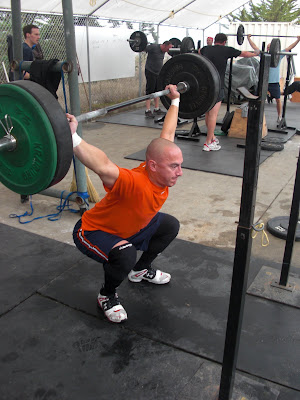 Hey guys--
I am out here in DC hating my SF Crossfit-free life. What was the burpee/OH Squat WOD?

Thanks, Kelly! This insight is one of the main reasons I love training at SFCF (aka Crossfit Heavy). In fact, I had a discussion a while ago about this very matter with some others on a blog (see comments to linked story).

Great post Kelly. I know when I completed Caroline a month back it was a shock to my system to power clean 185 45 times, but the high I got from doing something heavy for high volume definitely had me pumped to constantly challenge my notion of what im capable of. Now I feel that taking on a new workout @ greater weights is not a matter capability but a matter of time. I feel like Neo venturing into a world where anything is possible.

Lucas: "So Kstar you're saying Ill be able to dodge bullets"?

KStar: "No Lucas, what im saying is when the time comes, you wont have to".

Great post, Kelly. We'll be sure to play around with some heavy ladies in Brooklyn and see what we're made of.